The next bit is rather simple compared to everything previous but does require a bit more dexterity. It is important to remember that not all the specimens that have reached this step will come out unscathed. In fact, some specimens might not be suitable because they have been damaged in those earlier steps! Ever heard some tough walking cliché say “pain is weakness leaving the body”? Well friends, failure is just experience entering the body. Believe me, if I can do this, so can you.

At this point one should have a container of alcohol (denatured is fine provided it’s 95% or better) with specimens inside held together between two slips. During their time in the alcohol the water in the specimens has been dehydrated out by the alcohol. After having been used a number of times (more or less depending on the initial quantity of the alcohol and size and number of the specimens) the small amount of water present in the specimens will be enough to dilute the alcohol noticeably and it should be retained for other uses that require less complete dehydration.

One might be aware that besides dehydration alcohol will act as a hardener on many organic substances, chitin among them. Ardent hikers should know the old trick of preventing blisters by hardening the souls of ones feet with rubbing alcohol before a big hike. The hardening effect of alcohol will ensure that our specimens remain in shape for mounting, but it will also make them quite brittle. Avoid the temptation to rush and be careful as possible in the upcoming steps.

With a large watch glass or Syracuse glass on the table, and a wash bottle or pipette of alcohol at hand, remove one set of slips from the container of alcohol. Slowly remove the clips holding the slips together and separate them a small amount by sliding one or the other slip away. Resist the urge to lift the slips apart as an antenna or leg might more easily break off with that motion. Once the slips are slid apart a small amount it should become apparent that the specimen is more affixed to one slip than the other. Work with the slip to which the specimen is most attached at the bottom so that the specimen is facing upwards and keep the specimen wet with alcohol while gradually sliding the other slip away.

Once the top slip has been removed use a stream of alcohol from a wash bottle or pipette to rinse the specimen into the watch glass. With the specimen in the watch glass give it a quick look with a hand lens or dissecting microscope to see if any debris is clinging to it. Use a camel hair brush, fine needle, or eyelash to remove any debris from the specimen. If only a few specimens are being processed they may all be washed into the same watch glass before proceeding, or one may wish to finish each specimen before beginning the next. The choice largely depends on how much space is available in which to work, but I prefer to move each specimen though the process one at a time. 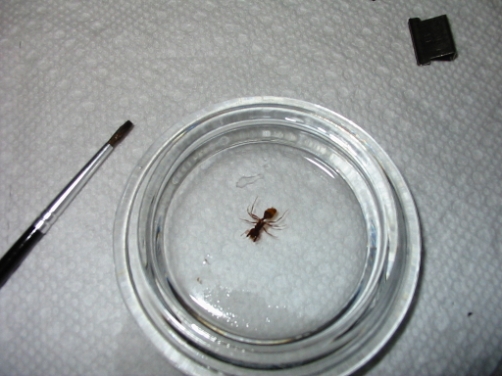 An ant washed into a Syracuse glass for cleaning

If the specimen has been macerated too long, not long enough, or has been otherwise damaged it should be obvious at this point. Whether or not to continue with a damaged or poorly treated specimen is up to the microscopist. An ant that has broken off legs or antennae, or one that is falling apart from too long a maceration can still make a serviceable mount. If the abdomen has been disintegrated (as sometimes happens when macerated too long) consider mounting only the head, mouth parts, antennae, or legs. If the specimen is clearly too thick or still retains its internal organs one can wash it in water and return it to the macerating solution, or start anew with a fresh specimen. Whatever the case, keep written notes on the quality of the specimen had at this point, as it relates to the operations performed on it. It’s one thing to read someones account saying a day or two of macerating is sufficient and something else entirely to know from experience that 48 hours of macerating is too much for one specimen and not enough for an other.

Once satisfied that the specimen is free of debris it must be cleared. Clearing is a simple operation in which the fluid of the specimen is replaced with one which is miscible in the mounting medium to be used. If working with Euparal for instance the clearer used would be Euparal essence or even simple the purest most anhydrous alcohol available. With Canada Balsam (sometimes called xylol Balsam, neutral Balsam, fir Balsam or simply Balsam) one has their choice of clearers, the one selected being largely a matter or preference the procedure is the same whichever is used. Three of the most popular and readily available clearing agents for Balsam are turpentine, xylene, and Clove oil. Of the three Clove oil is the safest to work with (though it is also more expensive and harder to find than either turpentine or xylene) and it is worth noting it has the least offensive scent.

With a fair amount of clearer in a small jar close at hand, remove the specimen from the watch glass using a section lifter, dry camel hair brush, fine forceps or whatever is convenient. Once lifted from the watch glass allow as much alcohol as possible to flow from the specimen without its drying out completely. A small corner of filter paper can be touched to large specimens if necessary. Place the specimen into the jar of clearer. The amount of time required for the clearing agent to penetrate the specimen is dependent on its size and just how well macerated it is. I find that 24 hours is nearly always enough time but have used as little as one or two hours in the past.

Ant in clearer with section lifter and centering card

After 24 hours the clearer should have penetrated the specimen entirely and replaced the alcohol that was used to dehydrate the specimen. If xylene was used as the clearer and it was observed to become milky when the specimen was placed into it then specimen was not fully dehydrated and should be placed into pure alcohol for an hour or so then put into a new dish of clearer. With a fresh and scrupulously clean slide laid out on a centering card the specimen should be removed from the clearer and laid out as desired. It will not be quite so brittle as it was after being taken from alcohol but one must still be exceedingly careful with the delicate appendages.

With the specimen centered on the slide take a small corner of filter paper and leach away any excess clearer clinging to the slide without removing that which wets the specimen. At this stage I find that Clove oil is not only the best smelling clearer but the most forgiving. It will not evaporate nearly as fast as turpentine or xylene and provides some valuable extra time with which to ensure that the specimen is positioned properly. Unfortunately, this also means that specimens produced with Clove oil as the clearer will also require a longer curing period.

Cover slip placement is often treated as a matter of preference but I vigorously oppose that notion. For particular styles of mounting, particular methods of cover slip placement are undoubtedly superior. The best method is however that with which the mounter is able to achieve the best results. In the case of pressed and macerated insect mounts it is easiest to place a drop of mountant on the cover slip and then lower it directly onto the specimen. This method does the most to prevent displacement of the specimen and is the method by which the amount of mountant used is best gauged, an invaluable asses to the novice. One large drop or two small drops from a slender glass rod is about right for most specimens the size of a harvester ant.

Once the cover slip is set one may chose to apply a small amount of pressure with the eraser end of a pencil or a camel hair brush but its not often necessary. Any excess mountant exuded may me cleaned up with bit of filter paper, but take care not to disturb the cover slip. The slide may now be placed in a cool oven or incubator (if one is available) for a few hours to cure. The time required for curing depends on the mountant and clearer used as well as the temperature. If time is of the essence the slide may be warmed over a spirit lamp or Bunsen burner to hasten things along, but superior results are often achieved by simply placing the slide in a case of some sort to keep the dust off and putting it on a shelf or a hot summer time attic for a few weeks. At room temperature a natural Balsam mount with Clove oil clearer can take as long as two months to cure.

Don’t be discouraged by the waiting time, the longer the period which is available for curing the more opportunity there is for any bubbles in the mountant to work their way out. In some up coming posts I’ll write about putting together a simple slide dryer and ringing a mount of this sort, but for now here’s an ant thats been produced over the course of these blog entries:

Note the air bubble to the right of the lower antenna, and how unconcerned I am about it

4 thoughts on “Clearing and Mounting”