The oddity of 127 film is not so much owing to the negative size—sure it’s smaller than 120 and bigger than 135, but to the lack of sprocket holes. This characteristic has a significant effect that is apt to go uncommented even when it is recognized. Without sprocket holes the cameras are mechanically much more like medium format “red-window” cameras than either 110, 126, or 135 film cameras. Red-window cameras are far simpler mechanically than other film advance types.

Where 135 cameras take advantage of the films double sprocket holes and by the use of a gear system count the distance the film has advanced with each stroke of the advance lever, turn of the knob, or activation of the motorized advance, red-window cameras require the active attention of the camera operator. When loaded with film a red-window camera permits a view of the films backing paper. A standardized system of numbers on the backing paper show through the red window and thereby indicate the position of the film in the camera. When the advance knob is turned one numbers moves from the window and is replaced by the next.

Some cameras have a single red window and the progression is simple. By turning the knob 1 progresses to 2 and on through the total range. Other cameras may feature two red windows and the operator should then use both. When 1 is displayed first in one window, the shutter is tripped to take the first photo. The film is then wound on until the 1 shows in the second window. At this point the shutter may be tripped again for the second photo. The same process is repeated for the complete range.

In cameras making use of two red-windows the total size of the negative is restricted to half of the total size of the largest standard frame size. Such that for 120 film a 6×9 frame is reduced to 6×4.5 or in 127 a 4×6 frame is reduced to 4×3. The Kodak No. 0 Brownie is a single red window camera and captures 8 frames in the 4×6 format. Although a fundamentally obsolete format (even if it is still manufactured) 127 film and the 4×6 frame size are small enough that a photographer can often use a 135 negative carrier for (admittedly severely cropped) enlargements or a 6×6 120 negative carrier with an improvised mask for un-cropped enlargements. Not having to purchase a unique and hard to find negative carrier is a great boon to anyone working with 127.

On the topic of specialized equipment, one is apt to feel the need of a new developing reel. Although many of the common and currently manufactured plastic tanks and adjustable reels are able to handle 127 (as the adjustable reels are still equipped to take it despite it’s comparative obscurity) anyone favoring steel tanks and reels is apt to face a long search for a 127 reel. At least this only applies to those who must use daylight processing tanks. Those with access to a dark room may use the old roll-film standby of the open-tray loop.

In the field anyone accustomed to working with box cameras is apt to notice primarily the diminutive size of the Kodak No. 0. Those for whom the No. 0 is an introduction to box cameras are liable to feel quite the opposite. In either case one thing that is quite small are the viewfinders which are of the frosted window, lens-and-mirror type. However small the two (one in portrait and one in landscape) may be they are usually preferable to the wire-frame type that require the camera be held at eye-level. Holding a camera is a practiced skill and those unaccustomed to it may struggle to obtain clear photos with the quite slow shutter speeds of old box cameras. Needing to hold the camera to the eye only complicates the task.

Still, like all the box Brownies the No. 0 is a breeze to use. The simple flip-flop shutter is unlikely to ever fail and although the camera itself is small the winding key is full-sized and easy to turn. Equipped as it is with a pull tab for timed exposures one may wish to use it on a tripod only to find the No. 0 not offering a tripod socket. Thankfully, it’s small size mean it is easily fit into any of the common and inexpensive cell-phone tripod mounts. Take care though, the minimum focus distance is around 5 feet. 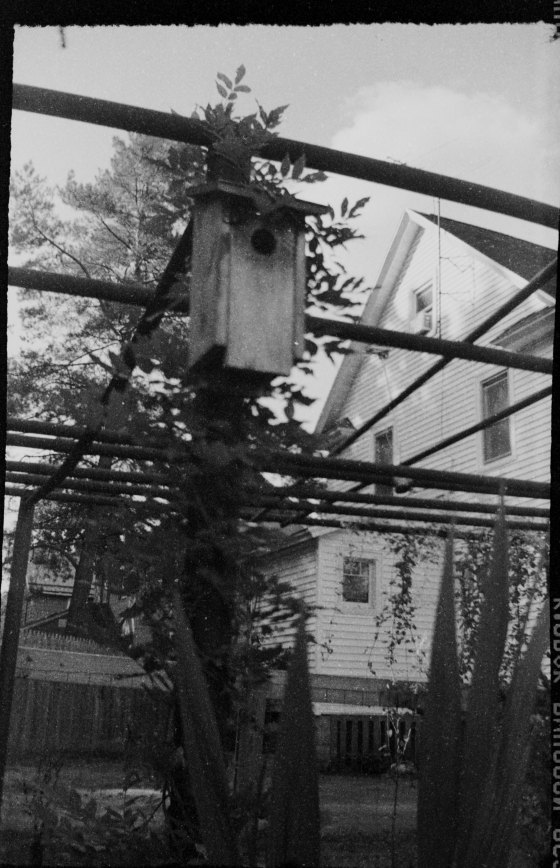