The Kodak No. 0 Brownie box camera is not currently in high demand, doubtless owing to it’s use of 127 film. So-called “cartridge” film, 127 is a 1-3/4 inch wide, 23-1/2 inch long unperforated roll film. It seems strange to describe it in terms of inches but honestly, using millimeters in this case is rather confusing as the film was designed using imperial units rather than metric. Somewhat confusingly it is not incased in a cartridge or cassette despite it’s colloquial moniker, rather it is wound on a spool with numbered backing paper in the style of more common (nowadays) 120 film. Cameras using 127 film are frequently seen in one of two frame formats, either the square 1-5/8″ (4 cm) or rectangular 1-5/8 x 2-1/2 (4 x 6.3 cm) produced by the Kodak No. 0 Brownie. 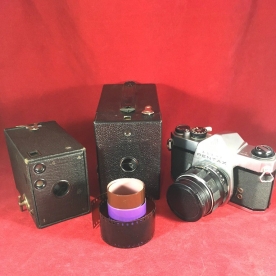 For a time in the mid 90’s the 127 film format was no longer in production by the major photographic houses. It continued to be available from specialty sources or as expired film on the used market. In general even the expired film cost in the area of $10 USD roughly double the significantly larger (and continually manufactured) 120 film format. Although currently a number of manufacturers have revived production of 127 film it is still generally in the $10-$20 USD range for a single roll. For that reason anyone wishing to pursue photomicrography with the Kodak No. 0 Brownie (or photography in general with a 127 film camera) would do well acquire only a few rolls and saving both the spools and backing paper.

Provided a supply of 127 spools and a numbered backing paper or two (though the paper could be fabricated from any light-opaque paper stock) one can easily and cheaply produce 127 film for personal use. The easiest method would be to simply spool a length of 135 film (standard 35mm film) onto the 127 size backing paper. Regrettably, 135 film is perforated and between that and the fact that it is already 10mm narrower than 127 film much of the frame will go un-captured. A better option is to begin with an unperforated film wider than the 127, 120—being nominally 60mm wide—is an ideal choice, and slit it down to the 127 width.

The above diagram of a film slitter may be used to slit one film width to another and can be with a few simple changes so constructed as to slit any desired width from any other. The basic rule of construction is that the film path must be of the width which is being slit from (the widest films width). In the crude diagram A is a block of wood of just over the width of 120 film. On either side of this are attached guides B which are additional blocks of wood which rise a short distance over the bed of block A. The position C is a groove cut into block A into which has been inserted a utility razor. The figure to the right shows this in profile. One further piece is needed, block D, which is the width of A and has a wide cut at location E into which the razor is able to slide without making contact with the wood. This channel covers the blade so it is not exposed while slitting (which must be done in total darkness) and allows block D to hold the film down such that it is slit by the razor rather than passed over it.