XN is still used in some papers by authors who wish to refer immediately to crossed Nicol prisms, or crossed polaraizer and analyzer. In practice one may rapidly find the point at which their polarizer and analyzer are crossed by turning one or the other until the light which is seen to pass between the two is at its lowest ebb.

The following photomicrographs were all taken with trinocular AO Spencer microscope using a Nikon 1 J1 consumer grade digital camera fitted with a Nikon 1 to c-mount adapter and c-mount to 23.3mm microscope eyepiece tube adapter. The polarizing apparatus was constructed out of two small discs of polarizing film which cost only $5.00 with shipping. If a full sized image is desired one need only click the image but be warned they are several MB in size. First will be shown the specimen in bright field, followed by the object under XN. 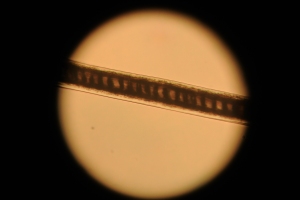 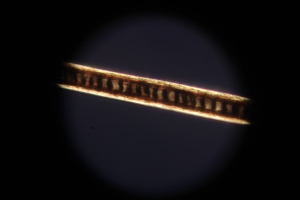 Portion of a fly wing. 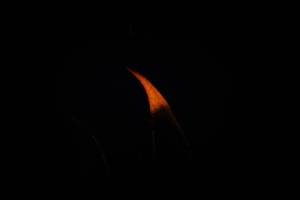 Many natural fibers, everything from cotton to the hair on ones head, are strongly birefringent. Different forms of fiber will show differently under crossed pols. A motivated individual can discern much from a hair without resorting to such destructive methods as scale casting.

Insects may be surprisingly dull subjects for polarized light and the process may do little but reveal how much dust was remaining on the specimen, as in the case of a hastily mounted flies wing which was collected from a disused attic. At times one may find with surprise that small portions are powerfully birefringent, as in the case of the hardened, venomous, forcipule of the garden centipede pictured above. Frequently only the mouth parts of a specimen will show double refraction. This simple fact can be immensely helpful when trying to identify the mouth parts accurately in whole mounts, especially when optical sectioning is insufficient.

One of these days I’ll have to put up a video of some chemical crystals under XN, stay tuned! -K