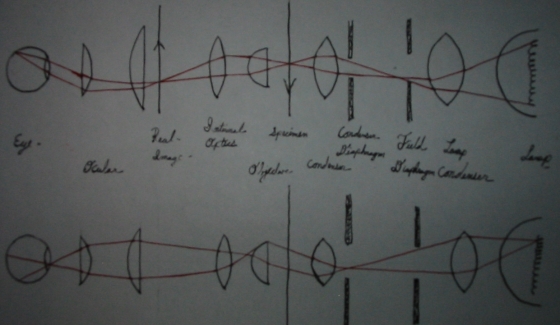 If a moment is taken to observe the eye in each part of the above image two important things can be observed; even if not readily apparent in the crude diagram. The path of the image forming rays shows that an image of the specimen converges on the fovea, while the image of the light source does not. Looking to the portion of the eye that is filled by the light forming rays, it is seen that an image of the light source is formed at the iris, and the rays diverge across the retina.

Before getting into the set up process a few important notes are necessary. A filament image is apt to be extremely brilliant, take care to lower the intensity of the light appropriately‡. Do not fall into the misconception that light sources equipped with a permanent ground glass filter or opal bulb are not able to provide Köhler illumination. It will just be very difficult to determine if the light source is in focus on the field diaphragm of the lamp and substage diaphragm. This difficulty may generally be overcome by the introduction of a disturbance (a pencil mark or foil point) on the bulb or ground glass.

It’s worth noting that when sighting down the body tube for step 8 one should be able to see a clear image of the light source. One should also be able to image the field diaphragm and substage diaphragm, which makes this step a wonderful time to stop and center the illuminator and substage condenser. At step 9 it may be necessary to obscure more or less of the back lens to provide for optimal contrast; from 25-33% is the recommended amount which should be obscured. Every increase in contrast beyond that which allows for the microscopist to better discern detail is still an theoretical decrease in numerical aperture and should be avoided if increased contrast is not revealing additional detail.

Filament image as seen in mirror.

In the photograph at left, the arrangement of a small mirror for observing the filament image as projected onto the underside of the substage condenser may be seen. In order to better illustrate the situation a bulb with a single long coiled filament was used. For microscopy it is often better to use a bulb with multiple filaments (or an opal bulb or diffuser) so that the entire underside of the substage diaphragm may be filled with light; doing so will result in a more uniformly lit field.

Field diaphragm of the illuminator

At right the image of the the very constricted field diaphragm may be seen. In practice it will not be necessary to stop down the diaphragm to such an extent. The color fringes seen around the diaphragm opening are evidence of the fact the the microscope condenser is of the chromatic (Abbe) type. The fact that the color fringe is of different colors on the left and right sides is proof that the illumination is not entirely axial. For critical work it would be advisable to take the time to properly align both the filament to the lamps condenser and the mirror to the same so that the color fringes are concentric to each other.

In the above photomicrograph we see that although the use of a single coil filament bulb produces a bright image, it is not uniform. Note in particular the right margin of the image where the coils of the filament are most apparent. Despite the limited size of the single coil filament, and the large field of view provided by the 16mm objective, it is worth pointing out that the central portion of the image is well lit by the commonly available bulb. There is no need to rush out and buy an expensive specialty bulb.

∗Most introductory courses in physics will cover the basics of ray diagrams as they relate to the use of mirrors and lenses. A simple web search will provide ample explanations and illustrations.

†It can be difficult for some people to view the rear lens of the objective unassisted. To provide assistance one can purchase or construct a phase telescope (Bertrand lens) that is used to align a phase contrast apparatus and sight the rear of the objective with that.

‡When it is not possible to dim the light with the apparatus itself or appropriate filters one may often simply place a plug in dimmer switch between the wall socket and the illuminator without ill effect. Color temperature will be affected but, that is infinitely preferable to damaged vision