I’ve been putting it off but… let’s have a look at blood smears. -K

What are Blood Smears?

Blood smears are the sort of slide most people imagine when asked to think of a specimen for microscopy. They are thin, generally well-stained, films of blood secured to slips for observation under high power. Such slides also happen to be among the most commonly produced slides on earth. Medical practitioners all over the world, be they in state of the art laboratories or primitive field collection sites produce countless blood smears annually while working to diagnose and treat profoundly diverse diseases. To drive home their abundance; I’ve nearly one thousand smears provided by a student who produced them all while working on a single research project. There was a time when blood smears were routinely used in biology classrooms to introduce microscopy and cellular anatomy to students from grade school through to university, but concerns for safety left blood smears by the wayside and educators began to focus on onion skins and relied on ready made smears.

A variety of blood smears.

At left one may observe a variety of blood smears. The top is a double smear of blood from a laboratory mouse that was made as part of a study relating to malaria vaccination. Bellow that is a human blood smear that was used as a representative example of sever chronic anemia for diagnostic comparison as part of hospitals hematology lab collection. The final two slides are representative of modern, mass-produced slides of the sort one might find in a young students biology classroom or a popular science store. Differences among the slides are immediately obvious. One might consider that all the slides are utilitarian; constructed for particular purposes to which they are well suited.

The first two present an observable area of considerable size, such that a range of structures may be found in quantity. Large smears allow one to consider the percentages of the various types of leukocytes, for example. The size of the smear likewise ensures that some portion of it is apt to be of optimum thickness. Additionally neither of the first two slides is furnished with a cover slip. While this makes the smears rather more vulnerable, it also permits the use of very high power, high numerical aperture immersion objectives with exceptionally limited working distance.

The second two slides feature comparatively limited area for observation. What material is available for observation is insufficient to provide much for study but is instead exhibits a representative specimen, uniform, and secure beneath a cover slip. Making use of such a limited portion of the slip permits the slides to be used on microscopes lacking mechanical stages and relying instead on simple stage clips for securing the slide. Stage clips would severely damage the smears on either of the first two slides. Struck by the curious rectilinear outline of the smear in the second two slides, one might not be surprised to know their smears are actually cut from a sheet and then mounted as a transparent object. Mechanically neither of the bottom two slides is suitable for oil immersion work. However, they are widely available, inexpensive, and sturdy enough for prolonged use in a classroom setting. 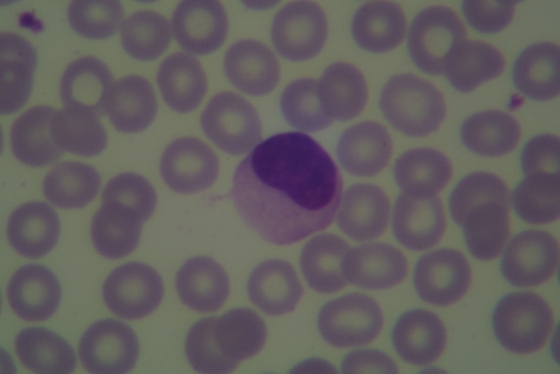 If your kisses can’t hold the man you love… mononucleosis will!

More on blood smears next time! I have got to stop being so long-winded… -K